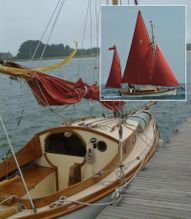 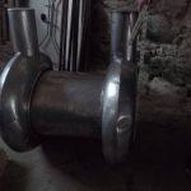 William Osborne senior (1880-1931) established a business in London in 1912 building motor car bodies, first in Pall Mall and later in Piccadilly. In 1919 William decided to expand into boat-building after receiving an order from the Sussex Motor Yacht Club for a one-design 20-knot powerboat series. William found suitable premises fronting the River Arun in Littlehampton. Motor-yacht commissions soon followed. First from W J Pearson for a 40ft. motor-yacht MA JOIE in 1919 followed by a 60ft. MA JOIE ll in 1920. Three orders for 1921 and two in 1922. The company quickly became known in the industry for their ‘Osborne Finish’

In the late 1920s, William produced a one-design series of 9-ton motor-yachts called the ‘Everymans’ Further one-designs cruisers followed in the 1930s mostly named after birds. Swallow and Swallow Senior. In 1931 William Osborne junior took over the running of the business following the death of his father aged only 51.

Osborne’s were fortunate in receiving orders to build lifeboats for the RNLI and they incorporated this high standard of double skin construction to their range of cruisers from the 1940s to 1960s. The bird theme continued with single or twin-engined cruisers, hard-chine designs from 25ft to 50ft. These included the Swift, Osprey, Falcon, Kestrel, Martlet and Eagle. By the late 1960s, Osborne’s introduced a range of up to date stylish cruisers, the early examples built to their exacting standards, well above Lloyds requirements of the time. Later these designs became available as GRP moulded hulls with the King series, notably the Kingswift and Kingfalcon production cruisers.

FINESSE is one of the final double-skin mahogany built examples of the express cruiser designs. She was launched in 1968 for M J Cobham of London SW1 and stationed on the Hamble. In 1972 Alfred & Lilian Moseley from Poole acquired the Osborne. They re-named her LILLENA 11. The original 30ft motor yacht LILLENA also built by Osbornes in 1949. In 1975 K F Boardman-Weston of Mill House, Near Burton on Trent bought the vessel keeping her in Poole Harbour. The late owner bought the boat as a project to be restored by his Thames side boatyard. Unfortunately, after a significant amount of work on the hull the vessel remains unfinished. However, the work completed is to a high standard and the vessel is offered with much of the original joinery and gear. The hull has received the SP system with four coats of epoxy resin below the waterline, and three coats everywhere else. The topsides then had four coats of hi-build 3 oz and then three coats of international C2 pack polythene.’

Report and works carried out

The vessel is double diagonal hulled on steam-bent timbers and framing. The decks are teak laid over marine grade ply. The ply has been resin bonded and a layer of hessian cloth is bonded.
At commencement the boat was filthy but the general condition overall was excellent with very little rot (timber cost for repair just £125.00) The boat was dried out and Pete White of WestSystems was called in as the owner had previously decided that although the hull was in excellent condition she would be put in resin with West Special Crow Foot Fabric laid to all areas below the waterline.

When purchased, the engines were cleaned and serviced and painted in Perkins blue and she attended the traditional boat rally at Henley before the work commenced on the vessel.

Remove all paint from the entire vessel

Remove all bolts for running gear

Inspect for cathodic corrosion (All good)

Stop and fill all and paint three coats of epoxy paint to all previously painted areas carefully
stopping and filling and preparing between coats.

Remove and repair all windows ready to refit

Prepare and paint all decks and floors previously painted and repaired. Prepare and oil in all other decks to both sides.

A desirable and stylish cruiser ideal for inland or coastal cruising offering great potential for non-professional or professional finishing. A very worthwhile summer project, a rare opportunity to acquire an Osborne at a fraction of the price. Laid-up ashore for a good few years but kept snug and dry under an overall cover.

Important Note: The particulars / images of the vessels listed on this website are believed to be accurate but are not guaranteed, buyers should satisfy themselves regarding the same. No warranty is given as to the condition of vessel's hull, machinery and equipment / gear and an examination by a qualified marine surveyor is always recommended.

Boats for sale
by continent

Boats for sale
by country